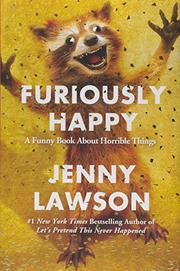 A Funny Book About Horrible Things

Lawson (Let’s Pretend This Never Happened, 2012), “The Bloggess,” pokes fun at herself as she addresses the serious nature of her mental and physical illnesses.

“I’ve struggled with many forms of mental illness since I was a kid,” writes the author, “but clinical depression is a semi-regular visitor and anxiety disorder is my long-term abusive boyfriend.” Rather than hiding the facts, she openly divulges, in a darkly humorous way, how she copes with rheumatoid arthritis, depression, panic attacks, anxiety, and the days when she is driven to pull her hair out or cut herself. Along with discussions about taxidermic giraffes and raccoons, whether cats yawn, and mobs of swans attacking her, readers learn the particular ways Lawson has learned to cope with those moments that threaten to overwhelm her—e.g., readings that send her cowering behind the podium or fleeing to the bathroom, passing out during a gynecological exam because she’s afraid of medical coats, or trying to find a solution to her sleep problems by attending a sleep clinic. The details are sometimes graphic—“I always tell gynecologists that if I pass out when they’re in my vagina they should just take that opportunity to get everything out of the way while I’m out”—but always honest and usually funny. Lawson’s goal is not to offend, although that might happen to some readers, but to lay bare the truth about her struggles in life so that others can benefit. She does a solid job exposing the hidden nature of mental illness by putting a direct spotlight on her own issues, thereby illuminating an often taboo subject. Her amusing essays open up a not-so-funny topic: mental illness in its many guises.

Kudos to Lawson for being a flagrant and witty spokesperson for this dark subject matter.