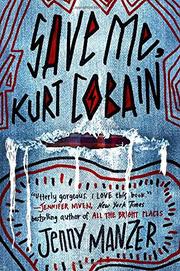 SAVE ME, KURT COBAIN

Kurt Cobain may be the answer to the central mystery of 15-year-old Nico’s life.

When Nico was 4, her mother walked out the door and never returned. Now, the mental energy she spends ruminating on her mother’s disappearance is matched only by her obsession with 1990s grunge music and the details of the life and death-by-suicide of the era’s supreme icon. After finding a hidden box of her mother’s CDs, Nico begins to wonder if there’s more to her disappearance than she’s imagined. Could Cobain be her real father? Could he still be alive? When, on a ferry ride from Seattle to Victoria, British Columbia, she spots a man with sparkling blue eyes, dirty blond hair, and a frail frame, she acts on impulse and jumps into his truck, ready to chase down the mystery of what really happened to both Cobain and her mother. The premise of Nico’s slightly unhinged quest is compelling: what if Kurt Cobain was still alive, hiding out in the woods making art? Her angst and attitude feel authentic, and she possesses an impressive depth of ’90s grunge knowledge. Readers will worry for Nico, even as they wonder if she could be onto something big. Unfortunately, in the end, the answers come too easily and too quickly to do justice to Nico’s bizarre journey.

A meandering exploration of abandonment and grief that switches tones too abruptly in its conclusion.