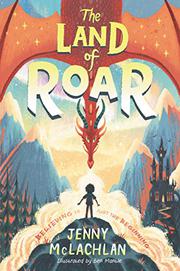 THE LAND OF ROAR

From the Land of Roar series, volume 1

A fantasy world comes to life and lures its young creators back into it in this imaginative middle-grade debut and U.K. import.

Narrator Arthur always loved playing make-believe in Grandad’s attic with his twin sister, Rose. Years ago they dreamed up Roar, a magical land that they entered via an old fold-up cot that acted as a portal. Now that they are 11 and starting school at Langdon Academy, Rose has new friends and wants nothing to do with her brother or their imaginary world. Rose may be done with Roar, but it’s not finished with her. When their grandfather is kidnapped and taken into Roar, Arthur and Rose must team up to mount a rescue mission. McLachlan does an excellent job of establishing the sibling tension before introducing the fantasy elements, and Rose’s desire to grow up and fit in feels as familiar and accessible as Arthur’s yearning to remain a child. While obviously reminiscent of classic fantasy, this narrative’s sheer inventiveness marks it as distinct. The twins’ widowed grandfather, a larger-than-life jokester from Mauritius, is a Peter Pan–like figure whose abduction brings the narrative into Roar, allowing the text and Mantle’s illustrations to go wild with creativity. The use of a wordless double-page spread to depict Arthur’s arrival into the fantasy realm is particularly inventive. Arthur and Rose are depicted as kids of color.

A sweet adventure and a paean to imagination and childhood innocence.