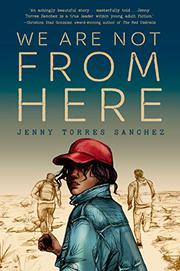 WE ARE NOT FROM HERE

In this action-packed and beautifully rendered depiction of the refugee migrant experience, Sanchez tells the story of 15-year-old Pulga; his brother by choice, Chico; and his cousin Pequeña, three teenagers from Puerto Barrios, Guatemala, who must sneak away from their town to survive. Pulga and Chico unfortunately happen to be at the wrong place at the wrong time when they witness the murder of Don Felicio, the convenience store owner who gives them Cokes in exchange for help. Pequeña, who is 17 and a new mother, wants to escape Rey, the gang member who raped her and wants to force her into marriage—and who murdered Don Felicio. The chapters switch between the first-person perspectives of Pulga, who has the heart of an artist, and Pequeña, who sees beyond her surroundings and escapes reality during stressful situations. Scared of a future controlled by Rey, the trio embark on the journey that will bring them to the United States. But first they must conquer La Bestia, the name given by migrants to the train that claims the limbs and lives of many who flee violence. Sanchez delivers a brutally honest, not-to-be-missed narrative enriched by linguistic and cultural nuances in which she gracefully describes the harrowing experiences the young people endure after making the choice to survive.

A gripping, heart-wrenching, and thrilling tale of survival.