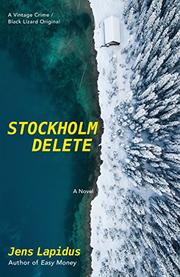 The author of the Stockholm Noir trilogy (Life Deluxe, 2014, etc.) uses a violent but enigmatic crime scene as the entrée to layer upon layer of criminal intrigue, past, present, and future.

It’s only natural to assume that the young man found bloodied and comatose behind the wheel of the car outside a house on a Stockholm island has killed the even bloodier and more inert man inside. But nothing else about the crime is obvious. It’s impossible to tell who the dead man is. It’s impossible to question the suspect, Benjamin Emanuelsson, who revives just enough to request Emelie Jansson as his attorney. It’s impossible to tell why Benjamin would be so intent on engaging this particular novice, who’s just barely passed the bar and whose white-shoe firm is dead-set against her involvement. And although it seems obvious that the killing has some connection to the 2006 abduction of Benjamin’s father, Mats, for which Najdan "Teddy" Maksumic served eight years in prison before his release, it’s impossible to tell what that connection is or why Teddy, who refuses to talk, kidnapped Mats in the first place or why Mats, rescued by the police after five hellish days and eventually turned into a confidential informant, leaped midsea from the ferry to Finland four years later. About the only clear rules the characters observe are those of the criminal syndicate (“Emanuelsson, Petrovic & Co., Fraud Services—We move, launder, and reinvest”) that lurks beneath the present-day mayhem and the injunction that whatever happens, no matter who leans on you or what they threaten, you never, ever abandon your friends—or, if you’re a lawyer, your clients.

A murky, repetitious, grueling dip into a sink of iniquity as immersive as a weeklong Berlitz seminar in crime that turns out to be a paean to loyalty in all its improbable guises.