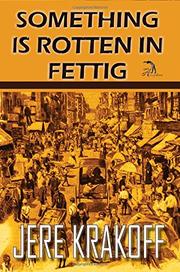 Something Is Rotten In Fettig

Leopold’s been socially awkward since he was a little boy in Fettig, capital city of the Republic. Once his family bequeaths him the butcher shop, he’s uncomfortable displaying his snazzy meat-cutting skills to draw customers. So when that fails to boost sales, Leopold opts for covering the display window with mud. Fettigians, however, are upset, seeing the shrouding of a commercial window as an affront to capitalism. Ensuing protests and demonstrations ultimately become so rowdy that authorities arrest Leopold and throw him in the Purgatory House of Detention for instigating the Mud Crisis. And so begins this farcical take on the justice system, in which a criminal trial commences with a lawyer’s “Opening Rant,” and the prosecution must prove “beyond a Nagging Doubt” that the accused is guilty. Leopold faces seemingly impossible odds. Presiding Justice Stifel, for one, is so convinced of Leopold’s guilt that he overrules every objection from the defense—decreeing each one an interruption—and asks the jury for a verdict before a single witness has even testified. Fortunately, Leopold has employee, pal, and chicken plucker Primo Astigmatopolous and childhood friend Ana Bloom on his side, so there may be a slight chance of an acquittal. Krakoff’s satirical slant definitely has bite—Stifel accessing the courtroom via a dumbwaiter, for example, speaks volumes. But the uproarious novel is first and foremost a comedy, rife with absurdist humor. Some of it is even a comedy of errors: public defender Felix Bleifus, unaware that Leopold’s a butcher, is terrified when he spots blood on his potential client’s shirt. “Unlike most of my competitors,” Leopold says, “I do my own slaughtering.” Krakoff, though, still manages a coherent, engrossing plot. His good-natured protagonist is easy to like, and readers will surely be on edge during the trial, particularly because at least one juror, who admits to despising Leopold, has all but convicted him.

Enough jabs at law and criminal justice to make a point, all packaged in a courtroom drama that’s pure entertainment.