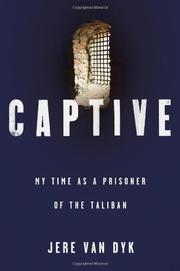 My Time as a Prisoner of the Taliban

An American journalist’s account of 44 days in a Taliban prison.

Van Dyk, a freelancer for CBS News and the New York Times, wrote years ago about his travels with the mujahideen who fought the Soviets in Afghanistan (In Afghanistan: An American Odyssey, 1983). In 2008, he began a dangerous trip into Pakistani tribal areas occupied by the Taliban, hoping to chronicle life along the rugged Afghan/Pakistani border, a center of Taliban and al-Qaeda activity. Working on his own, Van Dyk disguised himself as a pious Muslim and a member of the Pashtun tribe prevalent in the region. He had just entered Pakistan when a group of Taliban kidnapped him and his Afghan guides. The author’s memoir reveals his constant fear and uncertainty during weeks of captivity in a Taliban safe house. When Van Dyk admitted he was an American, his captors treated him hospitably—as dictated by their tribal code—but nonetheless badgered and toyed with him psychologically, convinced he was a spy. Between interrogations, his jailers described differing plans. They would negotiate an exchange of Van Dyk for three inmates at Guantánamo; they would free him for a ransom of $1.5 million, or $1 million, or some amount, to be raised by his family and friends. At the same time, they stressed that preparing for Paradise was all that mattered, and insisted that he draw closer to Islam through prayer and reading. With the occasional Predator unmanned aircraft passing overhead, he talked with his captors about the role of women in Islam, the training of suicide bombers, and other relevant topics; studied the Pashtun language; fantasized about escaping; and slept more and more. Van Dyk’s staccato style keeps the narrative moving. Finally, he was taken back into Afghanistan and freed, the Taliban having presumably received a $200,000 ransom. “We will be watching you,” they warned. Later, at a U.S. military base, looking like a Taliban member with his long beard, Van Dyk found that soldiers were wary of him. He says he still did not know who was responsible for his kidnapping, whether a ransom was actually paid and, if so, by whom.