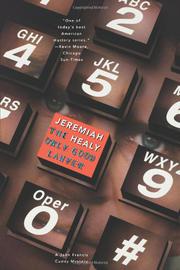 THE ONLY GOOD LAWYER

A successful Boston divorce lawyer has been executed; the estranged husband of his latest client, a churlish bigot, has been arrested for the murder. What's not to like, right? But John Francis Cuddy reluctantly agrees to help Alan Spaeth's lawyer with Spaeth's defense, even though signing onto Spaeth's cause obviously won't help Cuddy's relationship with Nancy Meagher, his favorite prosecutor. After days of beating the bushes, Cuddy comes up with any number of people who might've wanted Woodrow Gant dead: his most recent lover, the unemployed brother who benefitted to the tune of a $100,000 insurance policy, the law partner whose payoff was ten times richer, the onetime gang- banger whose stint in prison did nothing to make him forget the lawyer who put him there. What he doesn't find is any evidence that his client is innocent. Worse still, the most important discovery the cops make, Spaeth's alibi witness, is in no shape to testify on his buddy's behalf, and it's clear that Cuddy's cage-rattling is getting to the killer. Looks like Cuddy's 12th will be a bust—unless there's a last-minute burst of evidence whose timing puts this case well below Invasion of Privacy (1996).