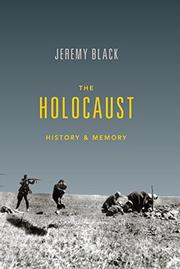 In less than 250 pages, a prolific scholar takes on the intractably difficult themes of the Holocaust.

Historiographer Black (History/Univ. of Exeter; Geopolitics and the Quest for Dominance, 2015, etc.) generally attempts to avoid emotion, “an abstraction that means smashing living babies’ skulls against walls,” in writing about ultimately incomprehensible genocide. Rather, writing in a scholarly tone, he recounts the genesis and the largely effective policy of Jewish extermination, which was the prime tenet of Nazi ideology. He touches on such matters as the Wannsee Conference and the effort to make Europe Judenfrei in a Final Solution. However, not all Jews died in the camps; millions were simply shot in the streets and fields of Europe, exterminated by the Einsatzgruppen, the mobile killing units, and others, many of whom kept extensive records even before such murder was industrialized. Black dismisses as implausible the claim of ignorance by the German population, who, at the time, had widespread information. The Allied forces, including the United States, did not consider the Final Solution a primary target of the war. In such a short book, the author covers a remarkable amount of well-documented material. Certainly, there must remain much that is unreported in his summary of events that led to the deaths of 6 million Jews, and there will be many readers to remember what is missing from his wide-ranging presentation. What is of particular note, along with the review of the anti-Semitic activities of Hitler’s allies and conquests, is the memorialization of the Holocaust around the world both after the war and today. Black is especially astute in his consideration of the current rise of anti-Semitism in Europe and the Middle East as well as the facile tendency to label diverse events as Holocausts.

A compact and cogent academic account of the Holocaust.