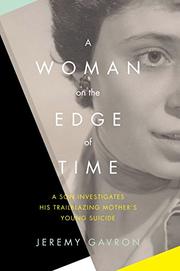 A WOMAN ON THE EDGE OF TIME

Why did a bright, vivacious young woman, the author’s mother, kill herself?

In 1965, when he was 4 years old, Gavron (Creative Writing/Warren Wilson Coll.; An Acre of Barren Ground, 2005, etc.) was told that his mother, Hannah, had died of a heart attack. He grew up knowing nothing more until, at the age of 16, his father revealed another story: in a friend’s apartment not far from where Sylvia Plath had lived and died, his 29-year-old mother had committed suicide after she was rejected by a lover who turned out to be homosexual. In 2005, two life-altering events—his older brother’s sudden death and his own heart attack—unleashed a desire to finally learn the truth about his mother. Like an archaeologist “conjuring a jar out of a few shards,” Gavron found fragments of elucidation in his grandfather’s diaries; his mother’s writings; and from interviews with family, friends, and even her last lover. In calm, temperate prose that belies his pain, anger, and frustration, he recounts his journey into his mother’s life and last days. Hannah had been a sexually precocious teenager who may have had an affair with the headmaster of her boarding school when she was 14. She studied acting at the Royal Academy of Dramatic Arts in London, married at 18, and, with her husband’s encouragement, enrolled in college. Eight years later, already the mother of two sons, she emerged with a doctorate in sociology. Her thesis, published posthumously, was titled “The Captive Wife.” Based on interviews, Hannah argued, “some women felt trapped and depressed rather than happy and satisfied at home with their children.” She may have shared those feelings, but they were complicated by narcissism, anxiety, panic, and “sudden ‘fits of despair’ ” when things did not go her way. As he delves into his mother’s personality, Gavron astutely concludes that “no suicide is the product of only one thing,” and all have shattering consequences for survivors.

A thoughtful meditation on a ruthless, mysterious final act.