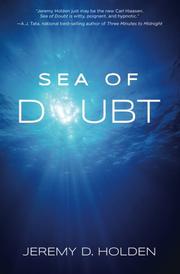 The Greatest Story Ever Sold

Holden (Second that Emotion, 2012) offers a novel about a possible new Messiah—and a company that must sell the world on the concept.

After a successful career at advertising firm CREATIF, 51-year-old Mal Thomas is set to retire in the Blue Ridge Mountains with his dear wife, Mara. Although he left on poor terms with his former colleague Oliver “OMG” Melville Grouse III, he’s ready to relax—that is, until a former client lures him out of retirement with an incredible offer. Mal, along with others from his old firm, are taken by private jet to Miami to meet with Alfredo Baptiste, a Cuban refugee who leads BAPTIST, a massive company involved in “seemingly every key area of American business and industry.” He’s worked with CREATIF in the past, and now he has a lucrative assignment for them—if they’re willing to take it. In short, he wants to tell the world that a young man from Brazil named Sebastian is the Messiah. It’s an odd offer, to say the least, but after some discussion (and some reflection on Alfredo’s willingness to pay them lots of money), Mal and his team agree to the challenge. They tackle it in an ever-so-modern way, using social media, celebrities, and their own advertising savvy. The story follows an oddly believable path; if a company were trying to sell the world on a Messiah, this might very well be how they would do it. The plot does takes time to develop—many initial pages are devoted to Mal’s background, including his childhood in England, and a rundown of his colleagues—but once things get moving, the book is hard to put down. Readers will quickly ascertain that there are two ways for the story to go: either Sebastian truly is the Messiah and there’s a supernatural climax in store, or some sort of hoax is afoot and readers must try to ascertain the rub of it all. Figuring this out proves to be an enjoyable adventure as seen through the eyes of a most unlikely hero.