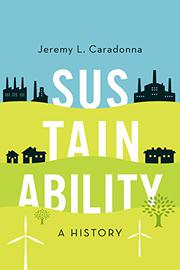 Caradonna (History/Univ. of Alberta; The Enlightenment in Practice: Academic Prize Contests and Intellectual Culture in France, 1670-1794, 2012) contends that our civilization is at a crossroads: Either we will maintain a business-as-usual approach and face inevitable collapse or adopt the path of sustainability.

For the author, sustainability is a broader concept than just conservation. With social justice and human rights as its “social dimension,” it covers “a broad range of domains: urbanism, agriculture and ecological design, forestry, fisheries, economics, trade, population, housing and architecture, transportation, business, education, social justice, and so on.” Caradonna claims that environmental issues should not be treated separately from political or economic issues. The environmental movement of the 1960s and ’70s was indeed “a transformation of the conceptual prism through which to view the world and humanity's place in it.” Books such as Rachel Carson's Silent Spring (1962) eliminated the idea of the artificial boundary between man and nature, recognizing both as part of the same ecosystem. Equally important, however, was its frequently overlooked counterpart: “the birth of 'ecological economics.’ ” Amory Lovins and other authors posed such questions as, “What is the point of endless economic growth?” and “How can nature, society, and the economy be studied as a single system?” In 1968, Aurelio Peccei's The Limits to Growth (1968) became a best-seller. These and other economists challenged the contention that the growth of unregulated markets was the only road to a prosperous society. Caradonna believes that there has been an important shift in ecological thinking since the 1980s. “Sustainability, in fact, has gone from marginal ecological idea to mainstream movement in a surprisingly short amount of time,” he writes. Now the issue is to define a path to sustainable development to replace globalism and the “reigning venture-capital approach.”

A provocative treatment of an important subject.