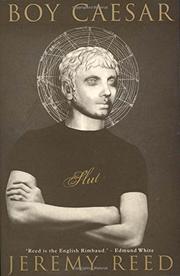 From a.d. 218 to 221, Rome’s emperor was an unlikely teenager with the unusually (even for Rome) tongue-tangling name of Heliogabalus. In the very early part of the new millennium in London, the much more simply named Jim is working on his university thesis about—you guessed it—Heliogabalus. In his introduction to this time-skipping tale, Reed (Pleasure Chateau, 2000, etc., not reviewed) mentions that he’s intent on a method whereby the past will dissolve into the present, and vice versa, in the manner of a Derek Jarman film. It’s an unfortunate but all-too-apt comparison, as the ensuing pages can have a tendency to be too mindful of Jarman’s film Edward II—another example of a renegade artist trying to reclaim a previously vilified gay historical figure by melding time periods but getting impossibly lost in the labyrinth of its own baroque mechanics. With all that said, Heliogabalus is an undeniably fascinating character who deserves a full recounting of his reign (though he was reimagined in a 1933 Artaud work, albeit as quite more violent than the dreamy-eyed pinup boy that Reed makes him into). Half of the book is given over to his interior recollections, and it gets quite a bit of steam out of the sheer magnitude of Heliogabalus’s anarchic plans. When the action shifts forward to London and the just-as-self-obsessed Jim (except he has a thing for designer labels, whereas the emperor was obsessed with color-coding gargantuan feasts), the narrative skips and stutters, abandoning the fragrant rhythms previously established in the ancient world. Reed has no problem dropping anachronisms like “rent boy” into the Rome-set text, a stratagem that seems too clever by half, and when Jim’s and Heliogabalus’s worlds start to meld forcefully, the whole thing collapses under the strain of its own pretension.

What wants to be a transgressive thunderclap ends up a mildly diverting exercise.