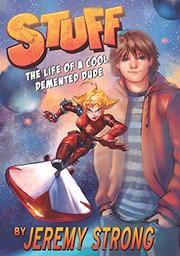 The Life of a Cool Demented Dude

Fourteen-year-old Simon is a British boy working through a lot of problems: a new stepmother, a new stepsister, a school bully and a girlfriend named Delfine who’s not as fine as a longed-for girl named Sky. And Sky’s the limit in this funny tale that ponders such major life issues as, “Have you ever wondered how things like marmalade were invented?” The writing is fast-paced and dialogue-driven, told in the wise-guy voice of an irreverent teenaged boy with plenty of references to farts, panties, legs, breasts and lip nibbling. A glossary is included for American readers unfamiliar with British terms such as gobwalloped, knickers, scarper, stonk and wozzer. Adding to the fun is Simon’s comic art (not all included in the galley), the graphic-novel component providing a great look into the fantasy life and mind of an artist as a young boy. In spite of the unfortunately silly title, here’s a British import that boys may devour just as girls have loved Louise Rennison’s Georgia Nicolson series. (Fiction. 12+)