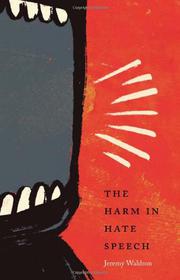 THE HARM IN HATE SPEECH

In an eloquent reply to free-speech advocates, Waldron (New York University School of Law; Torture, Terror, and Trade-Offs: Philosophy for the White House, 2010, etc.) moves step by step in building the argument as to why hate-speech laws are good for a well-ordered society. In many enlightened democracies in Europe, as well as in Canada, the use of threatening, abusive speech or behavior to stir up racial hatred is prohibited by law. Americans, on the other hand, are vociferously more guarded about the First Amendment, and the Supreme Court has opposed regulation on free speech only since 1931, when it struck down a California law forbidding the display of a red flag as an oppositional symbol. Subsequently, the government, Christian Church and public officials were deemed sufficiently strong enough not to need regulation of attacks on them, while even the Ku Klux Klan could indulge in hate speech “unless it is calculated to incite or likely to produce imminent lawless action.” But racial and ethnic minorities are vulnerable, Waldron writes, and a liberal democracy’s “assurance” of their protection from attack and denigration are not secure when hate speech is allowed free rein, such as in the time of public hysteria after 9/11. The author argues that the damage caused by hate speech is like an “environmental threat to social peace, a sort of slow-acting poison” that robs the intended victims of their dignity and reputation in society. Waldron’s analogy between hate speech and pornography—in terms of the defamation of women—is particularly noteworthy. He responds carefully to the notion of free speech as a necessary part of democracy’s “marketplace of ideas” and looks to the Enlightenment philosophes for their views on toleration and defamation.

A spirited defense without being heavy-handed.