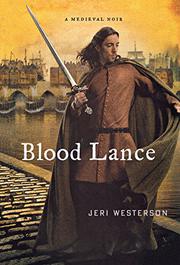 Despite being disgraced and living by his wits, a former knight cannot forget his vows.

Crispin Guest, aka the Tracker, is wearily returning home when he sees someone falling from the London Bridge. His plunge into the icy waters is to no avail, for the man was dead before he hit the water. Although many claim that the armorer was a suicide, Guest thinks otherwise and, with help from his loyal servant and assistant, Jack, is soon embroiled in the man’s dubious affairs. The beautiful Anabel Coterel claims to have been the armourer’s betrothed. Though at first she too says his death was suicide, she changes her mind and begs Guest to help her and her father, an often-inebriated tailor, recover their stolen rent money before they’re turned out of their house. A visit from Sir Thomas Saunfayl drags Guest deeper into a dangerous situation. Saunfayl, a friend from Guest’s former chivalric life, is accused of deserting and will die unless he can prevail in a jousting competition. Desperate to ensure his victory, he has paid a fortune to procure the Spear of Longinus, a religious relic he believes will give him that power—a relic apparently stolen from the armorer, who was acting as a go-between. When Geoffrey Chaucer, another friend from the past, arrives on the scene searching for the mysterious spear and Guest is harassed by knights loyal to the earl of Suffolk, King Richard’s chancellor, Guest wonders if his search for the relic and the murderer will be his last case.