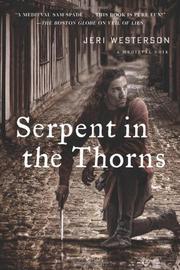 SERPENT IN THE THORNS

Outcast former knight Crispin Guest (Veil of Lies, 2008) seeks both vengeance and justice in the stews of medieval London.

When John of Lancaster rose against King Richard II, some noblemen joined him in his treason. Among them was Crispin Guest, who considered John almost a foster father. When the coup failed, Crispin kept Lancaster’s secrets even under torture. For his loyalty, the former knight is now the Tracker, living in one dirty room, attended by a clever but unruly pickpocket lad. When Grayce, a simple-minded scullery maid, finds a man in her bed with an arrow through his heart, she comes to Crispin. Despite the lowly tavern surroundings, Crispin can tell that the dead man was no peasant but an emissary of the French court. And he bore an even loftier treasure: the very Crown of Thorns pressed upon the crucified Christ. Because the relic is a peace offering from the French king to King Richard, the safety of the realm depends on Crispin’s discovery of the murderer. If Crispin, aided by Grayce’s shrewd, comely sister Livith, can uncover the treacherous plot and be the one to return the Crown to the Crown, perhaps he can both mete out justice and recover his lands, title and dignity.

An appealing premise that dissolves into a chain of events alternately obvious and implausible. Still, Crispin’s derring-do as he weaves between the Court and the kitchens is distinctively entertaining.