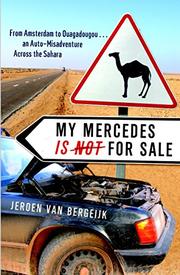 MY MERCEDES IS NOT FOR SALE

Dutch journalist van Bergeijk writes of his road trip around the Sahara and into the heart of West Africa.

His mission was to drive a 17-year-old Mercedes Benz 190 Diesel with 136,400 miles on the odometer to Burkina Faso, the landlocked country old timers once called Upper Volta. Many African entrepreneurs are adept at rebuilding automobiles that would be left for dead elsewhere. A lively market exists for the Mercedes, the auto once prayed for by Janis Joplin. Van Bergeijk planned to leave his car, taking a bit of profit, for the benefit of some deserving Burkinabe cab driver. Before the trip, however, there was an educational visit to Bremen and the Benz factory and some tutelage in the art of desert motoring. (Pantyhose can serve as a filter, and don’t forget the sand ladders.) Then, through searing sandstorms and shimmering heat went the intrepid, dusty desert traveler. From Cape Boujdour and Nouadhibou to Nouakchott, following the lead of French writer and aviator Antoine de Saint Exupéry and innocent comic-book avatar Tintin, the author trekked through Mauritania and Senegal to the Ivory Coast and Ghana. He encountered hustling officials, fraudulent guides, happy brigands, touring druggies and some “groovy” folk. Africa seemed a land of much sand and many bribes, both quite natural and lingering, along with cell phones, an occasional Internet café and endemic poverty. The romance of the desert may have faded since the advent of the motor car, but the inherent native penchant for patience and the avoidance of pressure remains. Despite the cultural chasm, bad brakes and broken shocks, the car, which may actually have clocked nearly 300,000 miles, was sold to a dealer.