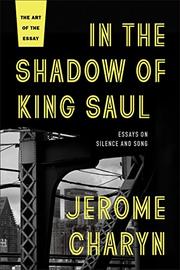 IN THE SHADOW OF KING SAUL

Essays on Silence and Song

Now entering his ninth decade, a prolific adventurer in fiction and nonfiction offers an amalgam of some of his favorite topics in 10 lively essays dating from 1978 through 2005.

In an introductory essay, Charyn (Winter Warning: An Isaac Sidel Novel, 2017, etc.) confesses to a passion for words and a lust for books. That will be no surprise to his many devoted readers. During high school and college, he writes, “I was discovering a wonderland of books—it was like plunging deeper and deeper into a rabbit hole….I began to build my own castle of Modern Library classics, with one bookcase piled upon another.” In the other essays, the author pays particular attention to the land of his birth, the Bronx, and its attendant mobsters. He remembers his family—a beautiful, troubled mother, an inattentive, illiterate father, a good police detective brother—mostly with affection. In his biblical exegesis, Charyn considers the feckless and fearful King Saul. Regarding literary matters, he expounds on the work of Saul Bellow, Lionel Trilling, the neglected Anzia Yezierska, and, most significantly, Isaac Babel. Charyn’s world includes Josh Gibson, the gentle and disturbed hero of the Negro Baseball League, and Krazy Kat, the androgynous hero/heroine of the great eponymous comic strip. The author also explores the history of Ellis Island before it was cleaned up as well as the life of the natty gangster Arnold Rothstein. Charyn’s New York is not E.B. White’s. His collected ruminations, rendered in an idiosyncratic style that frequently combines street jargon with Talmudic intricacies, speak of greenhorns and gangsters, of alrightniks and no-goodniks, bosses, “mooks” and “geeps.” His musings are populated by Babel’s Benya Krik and Bellow’s Augie March, and the leitmotif is the individual isolated in the world.

A very personal view of the past artfully brought to vivid life.