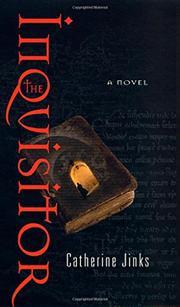 Dominican friar Bernard Peyre enjoys a relatively peaceful life with the Inquisition into Heretical Depravity in the small French city of Lazet. He assists the lead Inquisitor, Father Jacques Vaquier, in his inquiries about the potentially heretical beliefs of the townspeople and enjoys the collegial life of the Priory. When Father Jacques dies, however, his replacement, the austere Father Augustin Duese, permanently disturbs Bernard’s comfort. Ascetic and ill, Father Augustin nonetheless begins scrutinizing Father Jacques and several cases in which important local figures were found free of heresy. Reopening these cases requires old Inquisitorial registers, a few of which, mysteriously, are found to be missing. Meanwhile, Father Augustin investigates an enclave of women living in an abandoned farm outside of town. On one of his regular visits to the women, Augustin and his retinue are murdered, their bodies chopped into pieces. Fascinated by Johanna de Caussade, a widow at the farm, and horrified by the murders, Bernard is further frustrated by Augustin’s replacement, the Machiavellian Pierre-Julien Faure, who is determined to prove Johanna and her companions heretics. To protect Johanna and ultimately himself, Bernard must embark on a series of most un-Dominican acts.

Without condescension or compromise to modern sensibilities, Jinks’s debut immerses readers in the mind of a 14th-century Inquisitor who apprehends the world through a complicated and contradictory framework of devotional and biblical texts. The dense, conspiratorial result is bracing, though it may prompt simpler souls to wish for good old-fashioned anachronism.