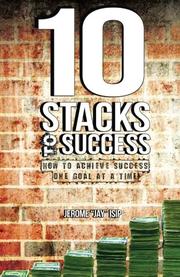 How to Acheive Success One Goal at a Time

Debut author Isip writes about his 10 tried-and-tested tips for success.

In 2001, Isip walked out of a placement exam at a community college after realizing that a life that began with filling in a standardized test had nothing to offer him. It’s an offbeat beginning to an often untraditional motivational guide. Many other books stress the importance of building a solid foundation of self-esteem and proactive thinking, but Isip favors a slightly bawdier, less cultivated approach, often to great effect. He encourages readers to perform a list of desired daily activities that will help them accomplish long-term goals, “[b]efore we check our phones, before we go on Instagram and Facebook, or before we light up that first roach or stogy.” Later, he movingly relates the lowest point of his own self-absorption, when he attended his uncle’s funeral drunk; he then realized that he’d deeply wounded his father with his flagrant substance abuse and his lack of interest in the feelings of others. These are unusually frank portrayals of a lifestyle that strays from the common self-help template. However, the book’s format (including chapters titled “Dream a Little Dream” and “Fight the Fear”) shares many of the genre’s clichés: Readers are encouraged to write down their goals or thoughts in a workbooklike format, and bullet points abound. Overall, its inevitable march to self-actualization isn’t as original as Isip’s colorful asides. Oddly, though, the author’s combination of street smarts and playful, somewhat shallow observations—such as complaining about having too much empty sex—is simultaneously its strength and its weakness. The book’s many unabashed references to illegal activities, for example, ultimately mark the author as a successful hustler, which may not be the best role model for confused, lost souls. That said, this book is a passionate affirmation of the inherent possibilities of life and of the irrefutable power of the entrepreneurial spirit.

A well-written, if somewhat uneven, self-help guide that offers many humorous personal anecdotes.