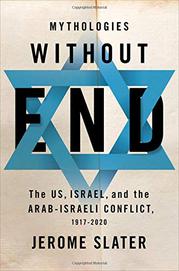 Evenhanded summary of Arab-Israeli relations since the beginning of the Zionist settlements 100 years ago.

“For the past fifty years,” writes Slater, a retired political science professor, “I have been studying, teaching, and writing about Israel and the Arab-Israeli conflict, and have many close connections in that country.” In this highly valuable contribution to the subject, the author combs secondary sources—he does not read Hebrew but notes that most studies are translated immediately into English—offering a "work of synthesis and interpretation of the existing literature." Slater is especially influenced by the so-called new historians such as Ilan Pappé, Benny Morris, and Avi Shlaim, and he essentially provides a systematic refutation of Abba Eban's famously snide 1973 comment: “The Arabs never miss an opportunity to miss an opportunity.” As Slater points out, along with Israeli aggression in the region, the U.S. has become a willing and noncritical ally. The author first debunks the myths that both Israel and the U.S. have long held regarding the founding of Israel—e.g., the "underdog" argument, the religious argument, and "Arab intransigence" argument, among others. Writing about the nature of Zionism, he shows that, “despite the Israeli mythology, the evidence is irrefutable that [David] Ben-Gurion and other Zionist leaders were not willing to compromise over Palestine and therefore 'accepted' the 1947 UN partition plan only as a temporary tactic to gain time until Israel was strong enough to take over all of Palestine." Moving meticulously through the many relevant conflicts—1948, 1956, 1967, the Cold War, and wars with Lebanon, Syria, and Egypt—to the present, the author argues convincingly that Israeli officials have often worked from a policy of deliberate provocation. Slater concludes with the Trump plan, which makes a two-state solution nearly impossible.

A cleareyed study that sounds a serious alarm for the future of Israel—a must for any library’s collection on the conflict.