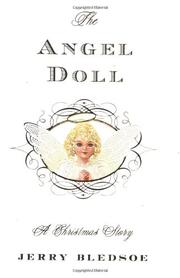 Cleanly written and nicely detailed Christmas story, not wholesale sentimentality, by true-crime writer Bledsoe (Before He Wakes, 1994, etc.). Back in the '50s in Thomasville, North Carolina, ``Whitey'' Black and the narrator (nameless), both newsboys and fourth- graders, become friends when they go halves on a paper route. Neither boy is well off. Whitey lives on welfare with his cigarette-smoking mother and polio-crippled four-year-old sister, Sandy. One Thanksgiving a charity group gives the Blacks a bag of groceries, shaming Whitey before his friend. As time passes, though, Whitey at last allows the narrator into his house, where he meets Sandy. Sandy's one source of solace seems to come from the story The Littlest Angel, which Whitey repeatedly reads to her. Come Christmas, Whitey decides to buy his sister a much longed for angel doll. But no such item is in the stores. When the two lads see a big doll that someone might be able to dress as an angel, Whitey devotes his savings to buying the nine-dollar toy and hiring a seamstress. But then Sandy is hospitalized and dies before she can receive the angel. Though the narrator never sees Whitey again, he discovers, as an adult, that his old friend has been giving out dolls to a children's hospital every Christmas. Bledsoe says his story was inspired by ``my memory of the first person I'd know to die.'' But the tale, while sometimes affecting, has little impact, perhaps mainly because Sandy lacks weight on the page. There's an idyllic moment when the boys go out with the narrator's father to gather two Christmas trees and mistletoe from the woods, and indeed, this short novel's best quality has less to do with the plot than with descriptions evoking local stores and streets at Christmas. May well move young, unsophisticated readers. (Literary Guild alternate selection)