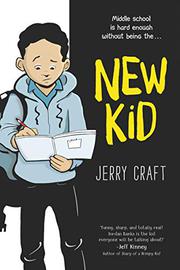 From the New Kid series, volume 1

Jordan Banks takes readers down the rabbit hole and into his mostly white prep school in this heartbreakingly accurate middle-grade tale of race, class, microaggressions, and the quest for self-identity.

He may be the new kid, but as an African-American boy from Washington Heights, that stigma entails so much more than getting lost on the way to homeroom. Riverdale Academy Day School, located at the opposite end of Manhattan, is a world away, and Jordan finds himself a stranger in a foreign land, where pink clothing is called salmon, white administrators mistake a veteran African-American teacher for the football coach, and white classmates ape African-American Vernacular English to make themselves sound cool. Jordan’s a gifted artist, and his drawings blend with the narrative to give readers a full sense of his two worlds and his methods of coping with existing in between. Craft skillfully employs the graphic-novel format to its full advantage, giving his readers a delightful and authentic cast of characters who, along with New York itself, pop off the page with vibrancy and nuance. Shrinking Jordan to ant-sized proportions upon his entering the school cafeteria, for instance, transforms the lunchroom into a grotesque Wonderland in which his lack of social standing becomes visually arresting and viscerally uncomfortable.

An engrossing, humorous, and vitally important graphic novel that should be required reading in every middle school in America.