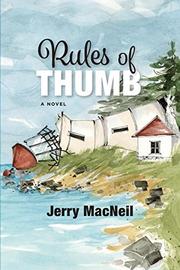 In this debut novel, an act of destruction sends a high school football player’s life spiraling toward blessed terrain.

Eighteen-year-old Orville “Orv” Osentoski plays high school football in Canton, Michigan. Part of the state’s Thumb (five counties that are “economically and culturally depressed”), “Can’t Town” loves nothing more than high school sports and beer. One night after a game in neighboring Frankendorf, Orv falls asleep in the locker room, missing the team’s bus home. He shatters a urinal while escaping the locked building and then walks to a tavern called Der Bierstube. Inside he finds Canton’s town drunk, Matty MacDougall, and asks for a ride home. In Matty’s roach-infested 1966 Mercury Montego, the two tour several more bars. After hearing of Orv’s escape, Matty nicknames him Chief and repeats the story to anyone who’ll listen. In the Dunkel Bar, a bartender named Brenda Slohn—who has a large birthmark on her face—sits on Chief’s lap, giving the reserved teen a taste of the Thumb’s adult nightlife. But he also comes away from the experience realizing that Matty, out of Canton’s large crop of characters, has a “diamond-among-rhinestones affability.” He also can’t stop thinking about Brenda, who’s six years older than he is. In this ribald tale, MacNeil offers an unflinching examination of downturned America, where “landscapes are increasingly acned with strip malls and housing complexes,” and most adults consume at least six alcoholic drinks a day. While difficult subjects are explored, the prose delivers excellent psychological nuances; Chief’s father, Garland, strikes his mother and “watching his wife fly across the room reminded him of his football days, which unearthed a confusing mix of contradictory emotions, like...pride and worthlessness.” The author lightens the mood with puns and sexual commentary. When English teacher Liina “Ol’ Bitch” Olbich asks her students to write a paper about someone in Canton whom they admire, Chief’s determination to portray Matty favorably proves emotionally revelatory, for the town’s citizens and MacNeil’s audience. Overall, sweetness and levity battle with bawdiness for the tone of this story.

An honest look at ugliness, hope, and love in a struggling small town.