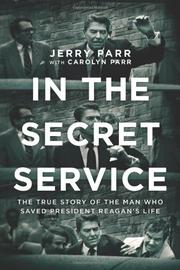 IN THE SECRET SERVICE

A former Secret Service agent looks back on a life dedicated to protecting the powerful and serving the weak and needy.

More than 30 years ago, John Hinckley shot President Ronald Reagan, barely three months in office. Only recently have we learned how close the president came to dying. Instead, he completed two historic terms and lived another 23 years. For saving the president’s life, many thank the quick thinking of Parr, lead agent of the president’s Secret Service detail, who diverted the presidential limo directly to the hospital. But the deeply religious Parr recalls the abiding childhood impression made on him by Code of the Secret Service (1939), starring Ronald Reagan, and he credits a higher power. In this slight but affecting memoir, Parr, with the aid of his wife, Carolyn, recounts his Secret Service years and charts his growing commitment to his Christian faith. While the concluding chapters dealing with his post-retirement work as a pastoral counselor for a variety of churches have their charm, most readers will be drawn to his insider stories about conducting investigations and providing security. He examines the toll high-tension protection work takes on agents and their families, details the exhausting travel, explains the complex advance work that precedes any presidential trip, and offers numerous behind-the-scenes anecdotes about our political leaders: JFK electrifying a crowd at the Waldorf, Carter at a soldier’s bedside, the just-defeated Humphrey embracing his Down syndrome granddaughter. Parr came late to the Secret Service, after an unsettled childhood, a four-year Air Force hitch and more than a decade as a lineman for electric companies. During his career, he protected presidents from Kennedy to Reagan, vice presidents Humphrey, Agnew and Ford, and a variety of foreign dignitaries including Marshall Tito, King Hussein, Golda Meir and Yasser Arafat.

THE FIGHT
by Dan Bongino
Nonfiction

MRS. KENNEDY AND ME
by Clint Hill
Newsletter sign-up