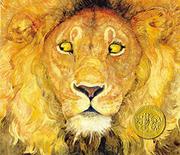 THE LION & THE MOUSE

A nearly wordless exploration of Aesop’s fable of symbiotic mercy that is nothing short of masterful.

A mouse, narrowly escaping an owl at dawn, skitters up what prove to be a male lion’s tail and back. Lion releases Mouse in a moment of bemused gentility and—when subsequently ensnared in a poacher’s rope trap—reaps the benefit thereof. Pinkney successfully blends anthropomorphism and realism, depicting Lion’s massive paws and Mouse’s pink inner ears along with expressions encompassing the quizzical, hapless and nearly smiling. He plays, too, with perspective, alternating foreground views of Mouse amid tall grasses with layered panoramas of the Serengeti plain and its multitudinous wildlife. Mouse, befitting her courage, is often depicted heroically large relative to Lion. Spreads in watercolor and pencil employ a palette of glowing amber, mouse-brown and blue-green. Artist-rendered display type ranges from a protracted “RRROAARRRRRRRRR” to nine petite squeaks from as many mouselings. If the five cubs in the back endpapers are a surprise, the mouse family of ten, perched on the ridge of father lion’s back, is sheer delight.