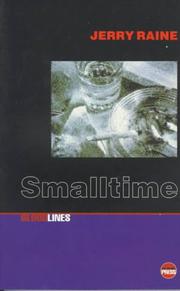 On his way to stick the day's receipts from his off-license in the night depository, Chris (who's too small-time even to have a last name) gets himself mugged. The thief doesn't get away with anything, but he leaves Chris bruised and sore and determined to identify him, even though he didn't get much of a look. The stage seems set for a classic game of cat-and-mouse, but first-timer Raine has something much more offbeat in mind. Leo Dash, the unsuccessful mugger, is a melancholic ex-truck loader on the dole who's still dazed by the recent suicide of his kid brother. And Chris is no angel himself, with a long history of stealing from his employers; a more recent inability to decide between the favors of a film company secretary and the girl at the off- license—so that he's been enjoying them both—and a half-baked plan to rob one of the shops at the local mall. The real joker in this pack, though, is Dashy's mate Kevin Jenkins, whose sexual ethics make Chris's look courtly, and whose one goal in life is evidently duplicating Dashy's attempted mugging, with a more lucrative result. An improbable friendship sprouts between depressive Dashy and struggling Chris, one step away from the dole himself, but nobody will be fooled into expecting either of them to escape their tight little island. Raine's plotting wobbles too uncontrollably to confirm the hints of a downscale Patricia Highsmith or Ruth Rendell. But there's nothing false or tentative about his lightning sketch of his proles' weary desperation.