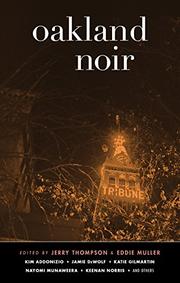 San Francisco’s grittier next-door neighbor gets her day in the sun in 16 new stories in this tightly curated entry in Akashic’s Noir series.

The hardscrabble streets of Oakland offer crime aplenty. There’s booze and drugs, as Katie Gilmartin’s “White Horse” and Phil Canalin’s “The Three Stooges” demonstrate. There’s prostitution, as Carolyn Alexander shows in “Bulletproof.” And there’s always red-meat murder, the kind Harry Louis Williams II depicts in “The Streets Don’t Love Nobody.” But Thompson and Muller also take pains to reveal the blue-collar heart of the city. Nick Petrulakis’ “The Bridge Tender,” Judy Juanita’s “Cabbie,” Dorothy Lazard’s “A Town Made of Hustle,” and Tom McElravey’s “Black and Borax” all show the fates of working stiffs who can’t seem to catch a break. Contributors tip their hats to Oakland’s political action pedigree in Kim Addonizio’s “The Wishing Well,” Mahmud Rahman’s “Prophets and Spies,” and Keenan Norris’ “A Murder of Saviors,” which treats the thorny issue of public vs. charter schools. And Nayomi Munaweera in “Survivors of Heartache” and co-editor Muller in “The Handyman” suggest that Oakland may just provide an alternative to the skyrocketing cost of housing across the bay—for the right people, of course, and at a price not calculated in dollars and cents.

Thompson and Muller have taken such pains to choose stories highlighting Oakland’s diversity and history that the result is a volume rich in local culture as well as crime.