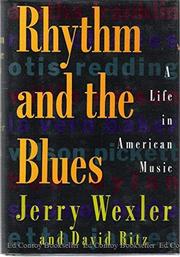 RHYTHM AND THE BLUES

A Life in American Music

Wexler's account of how he talked his way into co-ownership of Atlantic Records and went on to produce some of the century's great pop music—all of which makes for some of the juiciest music history one could hope to find. As an insider's account of the golden age of rhythm and blues (a term Wexler coined), this memoir may be matched only by Atlantic founder Ahmet Ertegun's—if he chooses to write one. By turns regretful and boasting, Wexler offers a story that is above all a superlative read, with the sections describing his 1920's-30's Manhattan childhood as interesting as the more musically oriented later chapters. With help from Ritz (who's written bios of Smokey Robinson and Marvin Gaye), Wexler describes his years at Billboard magazine, his move to Atlantic, and his relationships with the Chess brothers, Alan Freed, Phil Spector, and many others. Colorfully colloquial and unflaggingly enthusiastic, Wexler makes important connections between various styles and artists—noting the influence of the blues, for example, on country balladeers—and shows what a complex cultural phenomenon the best pop has always been. Accounts of how he managed recording sessions with everyone from Ray Charles to Aretha Franklin to Bob Dylan reveal much about both music history and making. Although testimony from ex-wives, friends, and (surprisingly) enemies isn't always well integrated, and though some readers will be less sympathetic to the author's temper and excesses, Wexler's contribution to the music is unquestionable, and there's plenty of material here that only he could provide. Many anecdotes—including an amazing account of a recording date with Guitar Slim—may pass into legend. It's a shame no CD set was issued with the book. For scholars and R&B/pop aficianodos, a terrific read—in spite of and because of its idiosyncracies—and great fun for others as well. (Seventy-five photographs—not seen) (First serial to Rolling Stone)