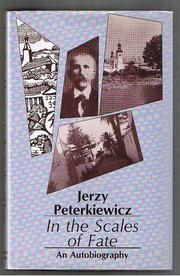 IN THE SCALES OF FATE

A reflective, often poignant memoir of a youth spent in Poland and of a new life begun in Britain after fleeing the Nazi invasion; by ÇmigrÇ novelist, poet, and scholar Peterkiewicz (The Other Side of Silence, 1970). Though concerned here primarily with the period before 1953, when his first novel, The Knotted Cord, was published in London, Peterkiewicz maintains continuity with more recent times by accounts of renewed contact with family members after years of separation, and by comparisons between his birthplace—the rural Polish region of Dobrzyn—and the Andalusian countryside now serving as his second home. Vignettes of village life and childhood memories flow easily into the author's adventures as a budding young poet in Warsaw just before the outbreak of WW II, with important moments ranging from the tragic (being orphaned as an adolescent and then utterly uprooted by war) to the joyous (delight at finding romance in the Reading Room of the British Museum). The reality of the ÇmigrÇ experience is reflected not only in Peterkiewicz's difficult, multistage journey from Warsaw to London, and in the fascinating wartime community of European fellow travelers that he joins, but also in his decision to write his fiction in English—a feat accomplished with fierce determination, resulting in a success often compared with that of countryman Joseph Conrad. Colorful yet contemplative, Peterkiewicz's story of remarkable recovery from loss and displacement is ensured an honored place among ÇmigrÇ chronicles. (Illustrations)