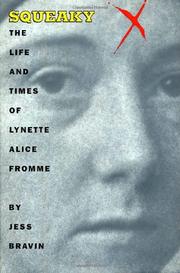 The Life and Times of Lynette Alice Fromme--Runaway

This biography of Lynette ``Squeaky'' Fromme—would-be assassin of President Ford—leaves large portions of her life unexplored, focusing in full only on her years in the Manson Family and her attempt to shoot the president. Among Fromme's many associates interviewed by former New York Times reporter Bravin is Phil Hartman, a high school acquaintance of Fromme's who later became famous on NBC's Saturday Night Live. His recollections of Fromme are bittersweet and provide some of the more compelling material here. However, large lapses remain, not the least of which is the suggestion, never resolved, of incest involving Fromme and her authoritarian father. And Bravin glosses over the two decades since Fromme's conviction in a mere ten pages. Perhaps there are so many loose ends here because Fromme would not agree to be interviewed. She might have, had she known that she would receive such delicate treatment from Bravin. While he pulls no punches concerning Fromme's devotion to Charles Manson, her political views concerning the environment, which she used as an excuse for her crime, are presented virtually unedited, no doubt thanks to Bravin's thorough study of the court transcripts and Fromme's own writings. Bravin seems to want his readers to conclude that Fromme had a good cause, after all. The problem is that she stated her cause—that we are killing ourselves by killing our environment—by saying, in essence, ``Stop killing yourself slowly, or I will kill you quickly.'' Bravin tries hard to make her somewhat sympathetic, but ultimately the reader concludes that Fromme is where she belongs—serving out a life sentence in prison in Marianna, Fla. Bravin's research on the crucial years is admirable, but his final product is incomplete and only intermittently interesting. (16 pages b&w photos, not seen) (First serial to Buzz magazine; author tour)