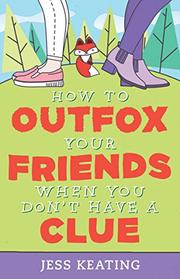 HOW TO OUTFOX YOUR FRIENDS WHEN YOU DON'T HAVE A CLUE

From the My Life Is a Zoo series, volume 3

When your best friend lives on the other side of the world, it can be hard to stay best friends.

When Liv comes back to town to visit, Ana's sure everything will go back to the way it was before Liv moved, and they will be as close as ever. Unfortunately, they've both changed far too much for that to happen. Ana is no longer horribly shy and in constant battle with Ashley; in fact, they're good friends. And Liv has purple hair and a new friend in New Zealand that she insists on texting, even when she and Ana are hanging out. Can the two overcome the distance they've traveled and create a new, stronger friendship out of the remnants of the old one? Keating's sharp focus is on one of the most crucial relationships of a 13-year-old's life: friendships. With her trademark kid-oriented wit and lighthearted touch, Keating leads readers through the daily emotional ups and downs of the typical just-turned-teenager who is trying to juggle hormones, parents, schoolwork, and, most importantly, her friends. Ana’s voice is refreshingly distinct: “It was actually sort of nice not to think about how I looked, unlike in school where I felt like we were all walking some pretend runway.”

A sweet reminder that being a middle school girl is about far more than boys and makeup.