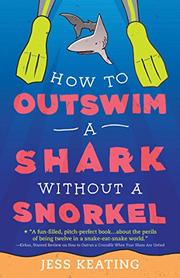 HOW TO OUTSWIM A SHARK WITHOUT A SNORKEL

From the My Life Is a Zoo series, volume 2

Which is worse: a shark or a 13-year-old bully?

Ana Wright is more worried about working with her archnemesis, Ashley, than she is about handling the sharks at the new Marine Adventure Zone in her family’s zoo. Ashley has always been beautiful, popular and mean, and now Ana fears Ashley is going to seek revenge for a trick Ana played on her a few weeks ago. But it turns out that Ashley is pretty nice and even helps Ana out with some wardrobe issues. Can Ana ever shake off the feeling that Ashley's mean side may be revealed at any moment? Add into the mix a pact over a first kiss plus her always-annoying twin brother, and it's no surprise Ana starts to stress. Keating maintains the same humorous, lightly soul-searching tone, perfect for a barely teenage girl, with which she infused Ana’s first outing, How to Outrun a Crocodile When Your Shoes Are Untied (2014). Ana and her friends explore the widening doorway of adolescence in a way that's both innocent and marked with fresh knowledge about desire and disaster in the realm of relationships. Occasionally, Ana's inner monologue leans too heavily on material she's previously explored, such as whether or not Kevin likes her, but the overall theme of living up to one’s own expectations makes for solid narrative bedrock.

An enjoyable frolic with a great message that kids won't even notice they're absorbing.