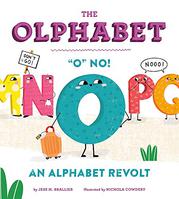 "O" No! An Alphabet Revolt

This alphabet book examines the ABCs from a middle letter’s perspective.

Why does A always get to go first? It’s an interesting concept that O, the 15th letter of the alphabet and narrator of the tale, ponders. O is a natural replacement: They’re easy to make, and the ABC song, er…OBC song sounds, well, “omazing.” As O contemplates the change, other thoughts run through their head. Maybe the olphabet should be a circle of letters instead of a line. That doesn’t leave anyone behind (we’re looking at you, Z!), and it’s a shape that really speaks to O. After working through various scenarios, however, O arrives abruptly at the conclusion that they’re happy where they are. The concept of the picture book is amusing, but the follow-through is uneven. Some letters, when considered by O, are introduced with words they begin (“B can be Boring, Bossy, Bad”), but this is not done systematically or consistently. The illustrations add little to the story. The physical placement of letters on some pages is odd, compositions fighting with alphabetical expectations. For example, an early view of the first few letters is backward, with A on the right at the head of a line of thirsty letters at a lemonade stand (mystifyingly staffed by S). (This book was reviewed digitally with 10-by-18-inch double-page spreads viewed at actual size.)

Too clever for kids just learning the alphabet and not clever enough for kids looking for more.