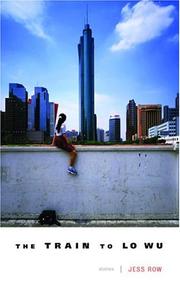 THE TRAIN TO LO WU

White American, black American, Hong Kong native, mainland refugee: Row’s viewpoint characters are a mixed bunch, but all are effortlessly convincing. Hong Kong, with its colonial past and uncertain present, is an apt metaphor for dislocation. The reasons for these deracinated lives may be personal (Alice, a high-school student in “The Secrets of Bats,” is disoriented after her mother’s suicide) or personal and geographic: Lewis and Melinda, an American couple, are having unexpected career problems (“For You”) in what would be just another marriage-on-the rocks story without the twist of Lewis’s seeking help through Zen in a Buddhist monastery. Zen reappears in “Revolutions,” where Ana, a Polish convert, offers solace to Curtis, a physically and spiritually damaged American painter, through the zigzags are not always clear—possibly stories are the wrong vehicle for Zen’s slippery riddles. Row burrows more successfully into the vagaries of relationships in his title story: Harvey, a fifth-generation Hong Kong resident, woos but fails to win a fiercely proud mainland girl. The standout, though, is Row’s most audacious story, “American Girl.” Chen is blind, an aging masseur in Kowloon. He was a child during the Cultural Revolution, when the Red Guards raped his mother, killed his father, and blinded him, but now a relentless American anthropologist, Jill Marcus, who studies trauma survivors, forces him to relive the past. “Ghost woman,” Chen calls her, the word for foreigner and ghost being the same in Chinese. But the put-down doesn’t bother Wallace, the worldly African-American lawyer in “The Ferry,” a taut tale of race and office politics. The seventh story, “Heaven Lake,” is remarkable for its account of a New York mugging that builds in tension as the mugger turns victim. Row handles gritty suspense quite as well as he does the problems of lovers.

This Whiting Award-winning author has a very bright future.