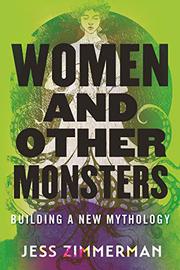 WOMEN AND OTHER MONSTERS

A witty and erudite exploration of the enduring influence of the female monsters in Greek myths.

Electric Literature editor-in-chief Zimmerman blends memoir and cultural criticism in a wide-ranging feminist analysis rooted in her youthful love of D’Aulaires’ Book of Greek Myths. Drawing on accounts by Homer and others, she argues that female monsters like Medusa and the Harpies have inspired more than a Versace logo and a metaphor popular among right-wing critics of Hillary Clinton and Elizabeth Warren. The fearsome creatures have fostered “a suspicion of women in general” and sounded a warning: “Beware their ambition, their ugliness, their insatiable hunger, their ferocious rage.” A graceful stylist who casts a wide literary and geographical net, Zimmerman can make nearly anything interesting. She begins a chapter on the Sirens by reappraising Aerosmith’s “Crazy” video and one on Scylla by describing the Josephinum medical museum in Vienna, which displays oddities such as wax bones. The author avoids academic cant and shows a disarming willingness to acknowledge her own vulnerability to damaging messages. Her musings on the Sphinx recall a college affair with a professor whose rundowns of her flaws became “a daily referendum on my specific insufficiencies” that at times caused her to retreat into a Sphinx-like self-imposed silence. Not everyone will accept her argument that the traits that made monsters dangerous “are actually their greatest strength[s]” and can be turned on their heads: “When you embrace your imperfection, your imperfection stops consuming you.” Nearly every page, however, brings fresh insights into age-old myths or tragicomic observations on 21st-century womanhood: “How do you cope with a day that might include a guy catcalling you on your commute and a murderous cop going free and a nationwide attack on reproductive rights—and an army of Twitter trolls telling you that all of this is good, actually, and anti-fascism is the real fascism?” This book is excellent armor for the battle.

A sparkling and perceptive critique of ancient ideas that still hold women back.