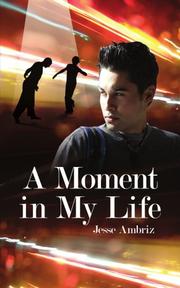 A MOMENT IN MY LIFE

Ambriz’s debut is a true-life tale of his coming of age one summer in San Antonio, Texas, set against the backdrop of the city’s roughest neighborhood.

The book begins in ’94 with Ambriz as a successful police officer, then quickly flashes back to the titular summer 20 years earlier. The youthful Ambriz is headed back to San Antonio after spending some time living with relatives in the Rio Grande Valley. Returning to his family home is a risky proposition for the author because of his brother Jimmy—a gang leader that young Jesse very much admires—but Ambriz insists on living with his immediate family again. At home, Jimmy is happy to see his younger brother, but Ambriz’s parents express concern over the pair spending time together. The author assures his parents that he will no longer be involved in the gang-related activities that he had been previously, though he immediately goes out to see the old gang, and, simply by fraternizing, does become involved. Told with no paragraphs and in large print on small pages, the story quickly proceeds to Ambriz also becoming involved with an uppity girl named Mina who has ties to the gang, as well as a few encounters he has with Los Ghost Town Boys, a rival gang. In the end, Ambriz’s violent reaction to a Los Ghost Town Boys attack on his brother prompts his father to send him to live in another neighborhood where Ambriz eventually goes to college and gets his act together. Despite the fact that the story is rife with characters and situations, the author describes them with such vagueness that they appear as little more than passing shadows.

The book’s simple style seems to suggest a young adult audience, but the moralistic qualities, as well as a pronounced lack of image and detail, keep the work from resonating.