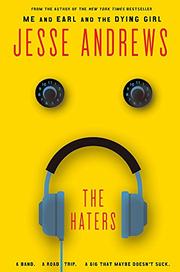 At jazz camp they meet fellow hater Ash, an intriguing, guitar-playing, older girl. They form a band and then proceed to make a series of dumb decisions that range in severity from bad to awful as they ditch camp to search for the perfect gig. It quickly becomes clear that this tour is a pressure cooker in which everyone’s ugliest traits will appear and start wreaking havoc. The banter among the three is often grating, laden with sexual frustration, dick jokes, and musical one-upmanship. Each of the three is pampered with privilege, yet something is awry. Ash is stupendously rich, the daughter of a Brazilian billionaire and a French model, both absentee. Wes was adopted from Venezuela by white, Buddhist parents who don’t make him the center of their universe. Corey is white and Jewish with overattentive musician parents who sometimes can’t pay all the bills. Though there are some truly hilarious scenes (such as Wes’ biting observations about the awkward ways in which well-meaning white people want to talk about race or his internal, self-scathing dialogue while high), other attempts at humor, such as casual jokes about suicide bombing and rape-y behavior, while believable as adolescent banter, strike the wrong chord.

A teen road trip packed with music and drama. There’s plenty here to both love and hate.