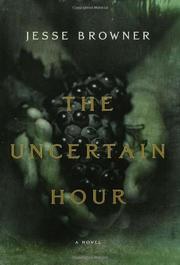 A long night’s meditation on love, life and death amid the decadence of the Roman empire, for those who like their historical fiction steeped in philosophy.

On the sparest of historical evidence, novelist Browner (Turnaway, 1996, etc.) reconstructs the last night in the life of Titus Petronius Niger. The year is A.D. 66, and the Roman nobleman who served as a reluctant insider within the court of the depraved Nero has been sentenced to death by the emperor. Petronius can chose the path of honor by taking his own life rather than allowing the executioner to do it. On the night that he must decide, he hosts a sumptuous party for his intimates, including his mistress Melissa, from whom he may harbor a terrible secret; his protégé Martialis, to whom he must entrust his legacy and who is angered at his mentor’s refusal to consider an escape attempt; and the younger Pollia, for whom Petronius lusts in a way he no longer does for his mistress. Though the plot elements suggest a toga soap opera, the novel is considerably more serious-minded, even overly so, as Petronius ponders his fate and shares flashbacks of the life that has led him here. The novel’s title refers less to Petronius’s hour of decision—for it is almost certain from the outset that he will die—and more to the process of illusion and attraction through which our minds invent the one we love. For a period piece, there are some surprising anachronisms in the prose (“What a load of crap,” for one). Yet the ultimate message that the way one dies is as important as the way one has lived, that death defines a life, is both timeless and modern. Ultimately, Petronius bequeaths humanity with the Satyricon, though it barely figures in the novel.

A reflective evening in the face of death.