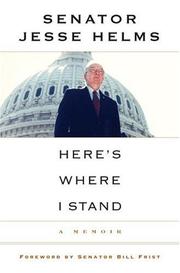 HERE’S WHERE I STAND

Who is America’s greatest enemy? Not bin Laden, not Hussein—no, the bad guys, suggests right-wing doyen Helms, are the liberal media and anyone of a liberal bent.

Helms—once a sportswriter and TV executive before departing for politics’ greener pastures—has nothing but scorn for the press, which coddles the nation’s foes and otherwise impedes the spread of Republican values. Thus, “When it became apparent that [Panamanian president Manuel] Noriega was deeply involved in drug smuggling, gun running, and money laundering, even many in the liberal media concluded that he had to go.” And thus, “Even though the liberal media tried to belittle [George W. Bush’s] accomplishments, his record as Governor stood up to the scrutiny of critics.” And so forth. Just as bad are the liberals in the Senate, who, Helms recalls, opposed him at every turn: the dupes who gave away the Panama Canal; the unholy triumvirate of Carol Moseley Braun (an African-American who opposed Helms’s defense of the Confederate flag), Teddy Kennedy (“Without his opposition, we conservatives very likely would not have done so well in the past thirty years” and John Kerry (“a bit arrogant and overbearing,” even though, Helms recalls, he sided with Kerry in calling for the Iran-Contra hearings). The digging at the presumed liberal elite aside, Helms’s memoir is mostly a what-I-did-on-my-summer-vacation affair, a forced essay punctuated by all the usual stump-speech platitudes about how we owe God thanks for “letting us live in America” and how the “terrorists” in Iraq “believed we were soft and not willing to stand up to their cowardly attacks.” There is almost nothing in Helms’s pages of the hard work of doing politics in the Senate, with all the compromises and back-door deals that entails, and entirely too much of Helms’s celebratory but insubstantial reminiscences of friendships with the likes of Ronald Reagan, Margaret Thatcher and the sitting president.

Self-serving, as a politician’s memoir will be—and almost perfectly unrevealing.