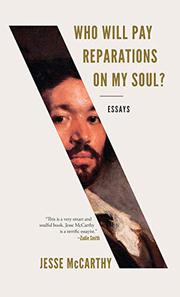 WHO WILL PAY REPARATIONS ON MY SOUL?

McCarthy, who teaches in the English and African American Studies departments at Harvard, makes an impressive book debut with a collection of 20 deftly crafted essays, some previously published in journals such as n+1, the Nation, and the Point, where he is an editor. McCarthy’s range is broad, encompassing writers Toni Morrison, Colson Whitehead, and Walter Benjamin; artists Jean-Michel Basquiat, Kara Walker, and French urban documentarian JR; singer/songwriter D’Angelo and cultural historian Saidiya Hartman; trap music; Frank B. Wilderson III and Afropessimism; and French society. Addressed in part “to the younger generations, struggling right now to find their footing in a deeply troubled world,” McCarthy’s writings on art, politics, and Black experience contribute to what he sees as “a deep yearning in our society not only for sensate, intelligent, moral reasoning, but also for the prophetic witness unique to the black radical tradition.” In the title essay, the author responds to Ta-Nehisi Coates’ “The Case for Reparations,” which incited much debate after it appeared in the Atlantic in 2014. Reparation for racial injustice, McCarthy argues, is “a moral rather than a material debt.” Although he acknowledges that Coates is justified in focusing on the wealth gap between Whites and Blacks, McCarthy takes the pragmatic view that reforms in education, sentencing, policing, and community empowerment are more achievable—and more significant. “The way to do justice to an oppressed minority is to allow it to flourish,” he writes, rather than to quantify, monetize, or value humans in dollar amounts. “Reparations should be about bending the social good once again toward freedom and the good life.” Having grown up in Paris, where he moved with his parents, both journalists, when he was 8, the author bears witness to “the Paris of color, of difference” that marginalizes Black immigrants. The tragic terrorist attacks at Bataclan in 2015, writes McCarthy, communicated “a desperate will to power” by those who believe verbal expression impossible.