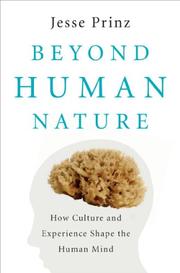 How Culture and Experience Shape the Human Mind

Cognitive Science editorial board member Prinz (Philosophy/City Univ. of New York; The Emotional Construction of Morals, 2008, etc.) tackles an age-old debate, making an argument for “the primacy of nurture over nature.”

The question has been endlessly debated: How much of man’s behavior is innate and genetically determined, and how much is affected by environment and experience? Thinkers who study such matters, including psychologists and philosophers, largely fall somewhere in the middle: “Between the poles of nature and nurture, there is a vast spectrum of possible positions,” writes the author. But that doesn’t mean there isn’t still lively debate, and Prinz makes clear that he stands on the far end of the nurturist side of the spectrum. Much as cognitive scientist Steven Pinker’s The Blank Slate (2002) presented a sweeping naturist viewpoint, Prinz makes arguments in favor of “a fairly thoroughgoing nurturism.” He seeks to dismantle the widely held notion that language, personality traits, moral values and other complex aspects of human behavior are determined largely by biology. Taking issue with the concept of genetic determinism, he stresses that environmental factors play a much bigger role in, for example, alcoholic behavior or IQ scores, than genes do. Throughout, he cites numerous studies and colorful examples to support his views. While Prinz’s passion for his subject is evident, and his positions well-researched, his prose can be a bit dry and repetitive at times. However, he presents some compelling arguments, and he is unafraid to take on popular beliefs to make his points—as when he challenges the idea of an innate human capacity for learning language or argues that depression has a large cultural component.