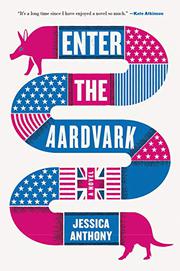 A story of taxidermy, political intrigue, and love between men from the author of The Convalescent (2009).

The story begins at the beginning—or close enough. It begins with the birth—or close enough—of our planet. Several eons pass over the next few pages until a Victorian naturalist traveling in Africa encounters his first aardvark. Then another story begins, and in this story, “you”—these sections are narrated in the second person—are an up-and-coming young Republican legislator with a Ronald Reagan fetish. These two stories become intertwined when an aardvark specimen Sir Richard Ostlet sent to his friend and lover Titus Downing, a taxidermist, is delivered to Alexander Paine Wilson’s D.C. town house. As both narratives unfold, it becomes clear that Wilson and Downing have a great deal in common. The taxidermist is compelled to be circumspect about his relationship with Ostlet because what they do together is an actual crime in 19th-century England. For Wilson, coming out is impossible not only because of his political party, but also because he doesn’t even define himself as gay. Yes, he has frequent and very enjoyable sexual encounters with a philanthropist named Greg Tampico, but they’re just two straight guys who happen to enjoy sex with other men. The aardvark serves as a sort of intermediary between these two men and their lovers. Resurrecting this strange beast allows Downing to stay connected with Ostlet even after Ostlet has abandoned him and married a woman. When a FedEx truck dumps this selfsame aardvark on Wilson’s doorstep, he sees it as a message from Greg—one that the congressman will spend most of the novel struggling to decipher. In addition to providing a lot of detail about the art of taxidermy, Anthony offers meditations on the interconnectedness of all things. There are also ghosts and Nazis, in case all that isn’t enough.