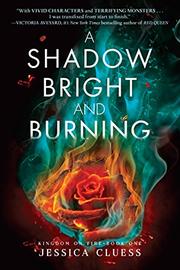 A SHADOW BRIGHT AND BURNING

From the Kingdom on Fire series, volume 1

The only thing more terrifying than being proclaimed the chosen one is secretly knowing you aren’t.

Of the three orders of magic practiced in this alternative Victorian Britain, only sorcery is legal—and it’s exclusively male. Fearing execution for witchcraft, 16-year-old Henrietta Howel has worked to hide her fiery powers, so she’s astonished to be hailed as the fulfillment of prophecy, the first female sorcerer in centuries. Whisked off to London, surrounded by luxury (and handsome young sorcerers-in-training), Henrietta fights to master magic and protect her dearest childhood friend, knowing that she’ll forfeit everything should her secrets be revealed. Every plot beat and character note here is utterly familiar; even the “subverted” tropes are upended in predictable ways. Henrietta is a stereotypical girl fantasy protagonist: uniquely gifted, haunted by childhood abuse, sympathetic to outcasts, “unfeminine” in her interests, believing herself unlovable even while adored by everyone except spiteful (and misogynistic) villains....Still, originality isn’t the only literary virtue, and Cluess deploys every timeworn device with stylish aplomb. Her gaslit world besieged by Lovecraft-ian horrors possesses vivid life, and if Henrietta’s hunky harem is populated by stock characters, their friendship still rings true. Despite frequent allusions to Henrietta’s “dark complexion” from her Welsh heritage, the characters are clearly all white, save the black, outlaw magician she befriends; even with the looming romantic polygon, hints abound that this world isn’t entirely heterosexual.

Despite possessing every cliché in the genre, an elegantly addictive read.