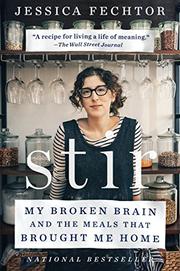 My Broken Brain and the Meals that Brought Me Home

Dealing with the aftereffects of an aneurysm through a love of cooking.

In 2008, Fechtor was moving into adulthood in a manner that could be described as ordinary. She had fallen in love, gotten married, and made her way through undergraduate school and into graduate studies at Harvard. She loved exercise, particularly running. One morning, a storm kept her from running outside, which turned out to be somewhat fortunate—if she hadn’t been on a treadmill when the aneurysm happened, she would have been much less likely to get help quickly enough. After the aneurysm, the author underwent multiple surgeries, with the standard caveats from providers about the risks and the benefits. When she awoke, she was told that, yes, she would live, but no, not like before: her sense of smell, the vision in one eye, her ability to speak as confidently as in the past, her sense of self were all changed. Physical therapy progressed slowly; there hadn’t been any neurological damage, but a month in bed had left her muscles weakened and her balance off-kilter. She began hearing that common refrain from well-meaning people: “everything happens for a reason.” She challenged that cliché—things don’t happen for a reason, but we make reasons for the things that happen. Her process of making meaning of the accident and the aftermath came to her by way of a constant throughout the many shifts of her earlier years: a love for food, flavors, and cooking. She writes with clarity and obvious joy about the foods that have meant so much to her, and she includes the recipes (she doesn’t believe in secret recipes) so as to pass it forward.

The recipes are simple and uncomplicated; many of them have a handful of ingredients but are prepared in a way that might surprise you. Fechtor’s book could be described the same way.