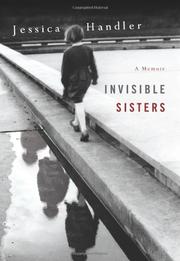 The author’s eight-year-old sister Susie died of leukemia in 1969, when Handler was ten. Their sister Sarah had been ill since infancy with Kostmann’s Syndrome, a bone-marrow disorder like leukemia, but much more rare; she died at age 27 in 1992. Yet Susie and Sarah were at her 1998 wedding, the author avers. They remain vividly present in memory, appearing in the waking reveries and sleeping dreams of their healthy sibling. The girls’ parents were liberal Yankee Jews transplanted to suburban Atlanta in the ’60s. They lived with their children on “a lush street where professors and doctors grew big gardens and tied bandannas around the necks of their Irish setters.” Dad, a crusading labor lawyer, was terrified by his daughters’ illnesses. He went a bit mad, was hospitalized, fled to the Far East and then returned for a divorce. (Perhaps, Handler muses, Dad was angry with her for having a future.) Mom pretended all was well, but the entire family was plunged into darkness by the deaths of two daughters. The author’s stark, lucid prose probes what those losses did to her parents and to her. Handler moved from Atlanta’s Coca-Cola society to the coke culture of Los Angeles. She maintained a journal and kept pertinent ephemera. In 2004-05, she obtained and pored over copious medical files on her sisters’ symptoms, medications and clinical trials. With a sure grasp of revelatory detail, the author recalls homely verities from a vanished life. Her memory piece is an elegy for her dead sisters, who are not quite lost as long as they live in her thoughts.

A heartfelt, painful family saga, skillfully told by a survivor.