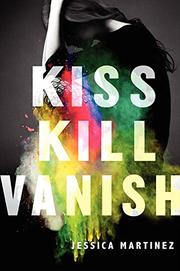 This latest novel from Martinez, whose work features and speaks to the recently emancipated teen, offers evidence that the new-adult literary niche is more than a marketing gimmick.

Valentina’s world exploded when, hidden in her boyfriend Emilio’s closet, she watched him kill a man at her father’s behest. Terrified and devastated, she’s fled Miami for Montreal and changed her name and identity. She finds Montreal’s brutal November cold as hard to take as posing for Lucien, the poseur artist and condescending jerk who’s hired her. His smarter, stoner brother, Marcel, is dangerous—he knows she’s dissembling. The fact that her family’s wealth is blood money haunts Valentina, but struggling to pay for food and her share of a decrepit apartment keeps her occupied—at least until Emilio turns up, demanding (unsuccessfully) that she return with him to Miami. While what he says turns her world upside down again, it can’t excuse her father. Desperate to escape the past stalking her, Valentina talks Emilio into fleeing together, but Lucien’s death upsets their plans. Valentina engages readers’ sympathy through each surprising plot twist, although that someone so bright and observant could remain wholly ignorant of her father’s true profession isn’t entirely plausible. Happily, such lapses in logic are few and easily ignored.