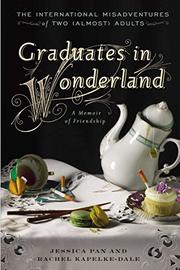 Two best friends and fellow Brown University graduates deliver a candid epistolary account of their postgrad adventures "down the rabbit hole" of the real world.

Just before BFFs Pan and Kapelke-Dale graduated from college, they made a pact to stay in touch via email and give each other all the details of their post-collegiate lives. Jobless but hopeful, Pan went to Beijing to have an adventure and learn Mandarin. In the meantime, Kapelke-Dale began working for a narcissistic art gallery owner in Manhattan since New York City was “just where you were supposed to go after college.” Excited and intimidated by adulthood and also deeply uncertain about their futures, both young women fumbled through their lives. After a stint as an underpaid peon in a Chinese PR firm, Pan found work as an editor at a Beijing magazine for English-speaking expatriates. In New York, Kapelke-Dale moved into a better job at a nonprofit art gallery, but that soon became a dead end. As Pan navigated the tricky realm of love and sex with colleagues, Kapelke-Dale tried to work through unresolved romantic issues with old flames. Pan’s path led her to a charming Englishman and a life “ultimatum”: commitment or footloose singledom. For her friend, the choice boiled down to facing her fears and taking a risk to leave NYC for life and graduate study abroad in France and then England. Told in two genuinely winning voices, the book presents a unique view of what it means to come of age as educated females in the chaos of a modern transnational world. Young women just starting out on their own “adventures in wonderland” will find it especially appealing. At the same time, however, older women may also enjoy the way this narrative celebrates the sustaining power of committed woman-to-woman friendship.