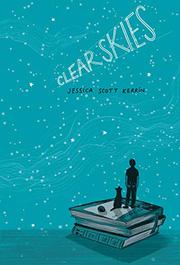 It’s 1961, the space race is on, and it seems everyone has stars in their eyes. Being a confirmed sky watcher with an eye-rolling habit of rattling off astro-facts at the drop of a hat, Arno is at first over the moon when he wins an invitation to the opening of a new observatory nearby. But then the thought of the dark and the crowds—and a panic attack in a movie theater—dim all the claustrophobic boy’s hopes. At the same time Arno’s friend Buddy finds his own hopes of becoming an astronaut dashed after he realizes why he can’t see that Mars is red. Though their personalities clash by day, a confessional nighttime meeting in Arno’s backyard brings out their better natures, as Arno offers Buddy telescopic views of astronomical wonders, and Buddy suggests coping techniques for Arno drawn from the astronaut-training program. Budding chemist Mindy leads a supporting cast that, like the protagonist and his family, defaults to white. Writing in a believably childlike third-person, Kerrin adds period details and handwritten pages of “Deep Thoughts” from Arno’s astronomy notebook to her low-key tale, and she closes with notes on the space program’s later history…including a mention of Roger Crouch, a colorblind payload specialist.

A quiet reminder that the stars are not out of reach, with work and well-timed help.